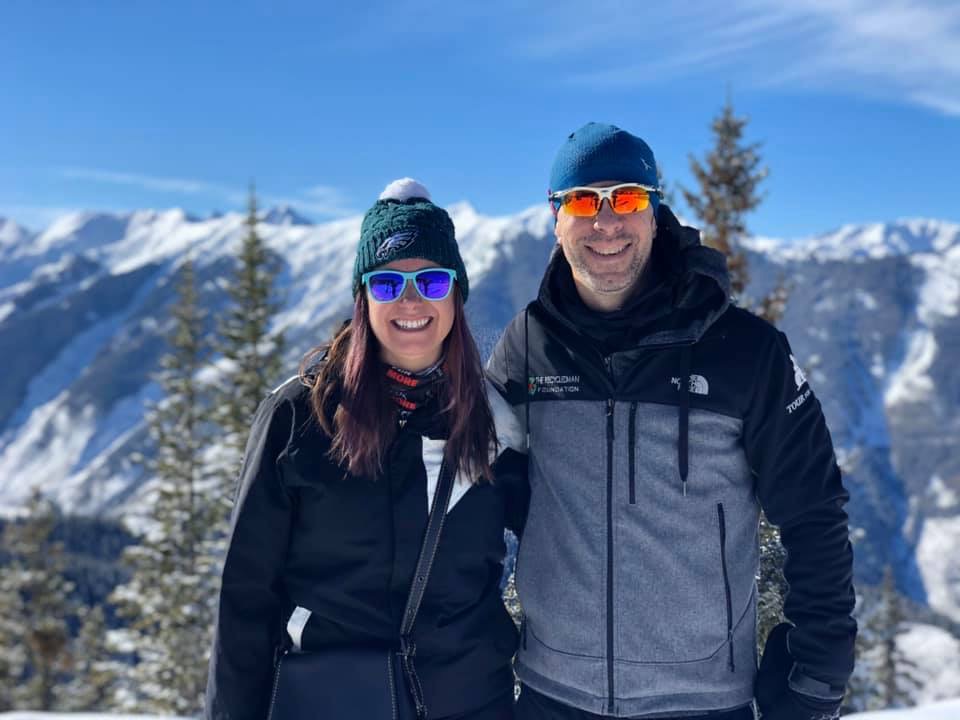 Erin and Derek on top of Aspen Mountain, 2019. Courtesy photo

“The fact that the centerpiece of the entire weekend would be participating in a 2.5-mile run up 3,267 feet of Aspen Mountain—are you kidding me?! For an adventure seeking heart transplant recipient like me,  that was just icing on the cake.”

In December of 2019, I was honored to be named one of two recipients of the “Bounce Back, Give Back Award” from the Chris Klug Foundation. The CKF, along with its founder, Chris Klug, has done so much to inspire and raise awareness for organ donation that it’s difficult to think of another recognition that would mean more to me. Knowing that Lauren Shields, herself a heart transplant recipient and complete rock star in the transplant community, was the other award winner and made the entire experience even more humbling to say the least. When my wife Erin and I were invited to receive the award and join the festivities for the Summit for Life weekend, we jumped at the chance; the fact that the centerpiece of the entire weekend would be participating in a 2.5-mile run up 3,267 feet of Aspen Mountain—are you kidding me?! For an adventure-seeking heart transplant recipient like me, that was just the icing on the cake.

Erin and I arrived a couple days before the event and had a chance to explore Aspen and spend time with Lauren, her mom Jeanne, and the entire CKF team. It was inspiring to see Team CKF in action, putting in the long hours, working with passion and commitment, with smiles from ear-to-ear the entire time. These people … what they do is nothing short of spandex-wearing, cape-billowing hero stuff, and they make it look easy.

Two days zipped past us, until we were standing at the base of Aspen Mountain, looking up at snow and tree lines, knowing that later that night, somewhere up at the top, we’d be celebrating with live music and warm drinks. I had hoped the entire run would take me about an hour-and-a-half, but I had no idea how wrong I would be.

We noticed Erin had been struggling to acclimate to the Colorado elevations as soon as we arrived. That, plus a nagging hamstring strain had led us both to decide that she was going to give the mountain her best shot, but if things got too rough, she’d stop and grab a ride to the top. As the sun set, Erin and I grabbed our ski poles, put on our Kahtoola MICROspikes®, took a deep breath, and lined up with everyone at the starting line.

“I had hoped the entire run would take me about an hour-and-a-half, but I had no idea how wrong I would be.”

Things started going sideways for Erin from the moment the horn sounded to start the race. I knew she was in pain, but to her credit she made it a half-mile up the mountain before she called it a day. We had already been dropped by the rest of the crowd, so the closest spot for her to get help was back at the starting line. I wasn’t about to let her go back down by herself, so she and I slowly made our descent. Once we were back at the lifts, Erin pushed me to climb back up the mountain (she knew how badly I wanted to make the attempt). She gave me a kiss, gave me a little love tap on my butt, and told me that she’d see me at the top.

I started my climb as Erin hopped into her gondola. By that point, I’d had a good mile of a warm-up, so I picked up the pace and pretty soon I started to see the back of the race pack. I knew the clock was against me. There was a celebration at the top of the mountain—a celebration in which my new friend Lauren and I were going to get an award and I didn’t want to let anyone down by being a great big “no-show” for the ceremony. I allowed myself a moment to look back down to the base of the mountain and the town of Aspen that stretched from it. My breath caught in my throat as I took in the sight. The crisp night sky sparkled with stars peeking through clouds as the moonlit snow of the mountain gracefully made the final run to its base. The lights of Aspen were glowing softly and amber-yellow as teeny-tiny car headlights ran back and forth through the streets. It was as if someone had built a life-sized snow globe and placed it there in all of its impossible beauty just for me. I inhaled, looked up at the sky, thanked my donor for this amazing life and then turned to make my way up the mountain.

I quickly caught up to a couple of participants who were struggling. As a back-of-the-pack athlete myself, I always find that the best stories are found at the tail-end of the race, so I slowed my pace so we could share our stories, some laughs, and some encouragement. We made it up to the first support checkpoint and found my new friends some ultra-cool snowmobile rides to the top of the mountain.

“I inhaled, looked up at the sky, thanked my donor for this amazing life and then turned to make my way up the mountain.”

I had been in the cold for a while and was starting to chill, but I decided I wanted to keep climbing on foot. Pretty soon a couple of distant headlamps became new hiking buddies as we continued climbing. We were all getting pretty cold and tired, and even the footprints of the rest of the racers were no longer easy to follow. One of the participants and I took a wrong turn and ended up going really out of our way. By that point, I knew I wasn’t going to make it in time for the celebration at the top. I called Erin to let her know I was fine, but probably wouldn’t make it for the party. A half-hour later, we were still climbing when my friend and I found a stray snowmobile and learned that we had gone way off-course. I looked at my GPS watch and saw that I was 3.5 miles into a 2.5-mile climb, and that what I had hoped would take 1.5 hours had slid into three. I decided to call it a night and caught a lift to the finish line on the snowmobile.

The festivities in the ski lodge had been held off as long as possible for me to arrive, but I knew they were well underway. I felt bad that I had missed everything. I knew it couldn’t have been avoided, but I felt that I had somehow let everyone at the CKF down. As I opened the first set of double doors into the lodge, I could see my picture up on the large presentation screen at the far end of the hall. Through the next set of double doors, I saw everyone sitting at their tables; I saw Chris Klug on the microphone and I heard his muffled voice over the speaker telling everyone that I was still out on the course and wasn’t going to make it in time. As he started sharing my story, I pulled open the doors, held my ski poles over my head, and shouted, “Did I miss anything?” What followed was a round of applause and cheers that was equal parts thrilling and humbling, leaving me feeling that much more grateful to be there. I made my way to the front of the hall to Chris as he held my hand over my head as if I had just won the race.

The rest of my time in Aspen is still a fantastic blur, but it’s important to note that it would have never happened if it weren’t for the dogged persistence of my good friend, Diane Milbourne, who made it her mission to nominate me. Thank you, Diane. Of course, I would have never had the experience if it weren’t for the Chris Klug Foundation. I will always be grateful to them, and to companies like Kahtoola who support the mission of organ donation and transplantation. To my wife Erin, and my daughter Emma, you are my reason for everything, and man what a reason that is. Finally, to my hero, the complete stranger whose heart still beats in my chest almost 10 years after we both died. Thank you, my friend. Thank you for everything.