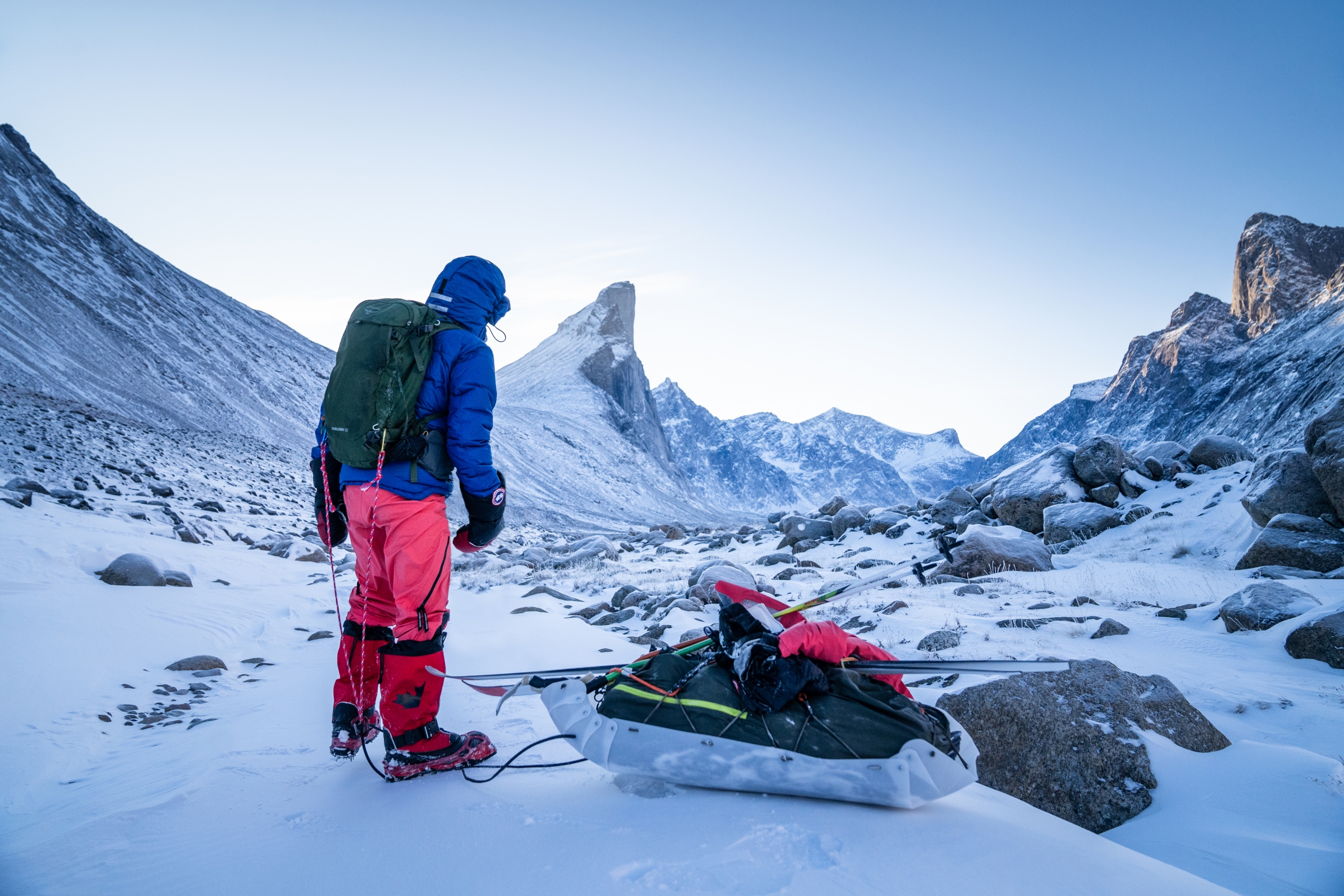 Ray Zahab using MICROspikes®️ to pull his sled during a 2020 expedition across Baffin Island. Photo by Natalia Gubareva

It was a strange, and yet familiar sensation, as I stepped out onto the frozen waters of the harbor in Qikiqtarjuaq.

It was January and the sun barely rose over the horizon—mid-day was like sunset at my home in Chelsea, Quebec. I found myself trying to will the sun higher in the sky, but as surely as it struggled to climb into view above the mountains, it sank back down quickly and with no lingering fanfare. And when the lights went out, it got cold. Really, really cold.

I was in the Canadian Arctic. In winter. My favorite time of year to visit.

Qikiqtarjuaq is an island community off the east coast of Baffin Island in the Canadian Territory of Nunavut. The community is home to around 500 people, a year-round population of polar bears, and in summer whales are common visitors. I have staged many expeditions over the years from here—a place I love so much, and a place where I have made friends that have become family.

For many years, I had been telling my good buddy, Billy Arnaquq, that I had wanted to do a January crossing, from the island of Qikiqtarjuaq across the frozen sea ice into the fjords off the east coast of Baffin, then cross Baffin Island, and finish near the western Baffin community of Pangnirtung. Billy wasn’t as convinced this was a great idea. He appreciated that I had done many February expeditions in the region, but, as Billy would say, “This time of year … January … is just different. No snow. Too cold.” A man of few but weighty words, I have learned so much from my dear friend over the years. But Billy also knows how freaking stubborn I am.

After 17,000km of expeditions crossing most of the large deserts in the world, and unsupported expeditions across Antarctica, the Arctic and Siberia, I was saving this project for 2020. It was my dream project—shorter than typical expeditions, but way punchier! A mid-winter crossing would be daunting and truly one of the toughest I’d do. It wasn’t the distance that was the crux of a project like this. Rather, it was the temperatures that could dip into the -60 degrees Celsius and lower range, sustained winds that could hit 100 mph, and the complete lack of snow at this time of year that would mean pulling my gear-filled sled over rocks, sand, glacial moraine, and hopefully some ice.

Dry overflow would be another challenge once I reached Baffin. On Baffin Island there is a network of glacial-fed rivers—raging hydraulics that are fed by glaciers atop the 5,000-foot mountains flanking the valley. In winter, these smaller rivers would run dry, but a top layer of ice would freeze as the water receded, leaving a precariously dangerous thin layer that, if I was to break through, could drop me meters below onto rocks and boulders. The main rivers are covered in wet overflow. In this case, these massive rivers rage in summer months, but in winter the hydraulic pressure forces water up through fissures in the ice and a new layer freezes with a pocket of icy, cold water underneath that makes them sketchy and super sketchy.

I had recently finished a 1,850km crossing of the Namib Desert in summer, followed by an off-road west to east crossing of Death Valley (over both Panamint and Amargosa Ranges) in July, so I was primed for some colder weather.

I looked back over my right shoulder as I left Qikiqtarjuaq, taking my first steps on the frozen ocean, aiming to cover the 110km into the fjord over the course of the next two days. I was self-contained but not unsupported, as my good friends Nats, Bob, and Stefano would leave later with Billy via snow machines on their own expedition, shooting video and photos of landscape, wildlife, and me included whenever possible. Although I was dragging with me everything I needed to survive, the fact that I would see them daily was mental support.

We always knew there would eventually come a time on the expedition when they may have to turn back. Billy could run the snow machines across the frozen tundra, but they certainly wouldn’t be able to follow me as I navigated dry and wet overflow on the rivers. But that was OK.

I had been on many unsupported/self-contained expeditions over the years. There was our Guinness world-record-breaking trek to the geographic South Pole (1,130km), our 2010 winter crossing of Siberia’s Lake Baikal on foot (650km), plus numerous unsupported/self-contained winter expeditions across the Canadian Arctic. This time, on my “dream + passion trip,” I would get to share part of this important experience with my friends, if by chance I’d get to see them during the days.

The day was warm—only -35 degrees when I started out—and I was making great time. The ice was almost clear of snow, and with temperatures not being super cold, the ice didn’t have that “sandpaper” quality about it. I pushed through Day 1 with a mild headwind and covered close to 50km while I dragged everything behind me in my sled.

Day 2 also started out reasonably well, but then at mid-morning the winds picked up, and even with goggles on and face covered, I started to feel the nip of frostbite on my face. I was used to dealing with that over the years, so it was manageable, but I knew at that point the game was changing. Darkness fell over the sea ice and I could feel my sled getting “heavier” as I made my way deep into the fjord towards Baffin Island. Temperatures dropped into the -50 degrees range with winds, and I realized it was the combo of the constant headwinds and sand that was blown into the ice (from the coast of Baffin) that made my sled drag like a cinder block behind me. I just kept my head down, thinking positive vibes that my headlamp wouldn’t freeze, and kept my Garmin aiming for terra firma on Baffin Island—and camp.

Day 3, I woke up, drank tons of coffee, packed up my gear, and got moving. This was a day that will forever live in my memory as the one where I applied everything I knew to survive it. It’s the day where I would be thankful for all those miles on previous expeditions spent learning and nurturing the gear I chose to use. In the extreme heat, on desert expeditions, proper gear choices make the expedition go more smoothly. On self-contained winter Arctic expeditions, proper gear choices keep you alive.

Over the years, I’ve accumulated items that I absolutely wouldn’t do an expedition like this without. My Canada goose down jacket, my Baffin 3-Pin expedition boots, my Osprey pack, and my Kahtoola MICROspikes®️. My “Kahtoola’s” have been on literally every winter expedition with me—from the South Pole, to Siberia, to Kamchatka, to the Arctic and beyond. A lifeline, my connection to the surface I am on, and my first point of contact to the ice and snow I am crossing, I wouldn’t attempt to cross the ice of the Arctic without them. They have helped me scale glaciers. They have provided me with the traction needed to haul a 185-pound sled to the South Pole. They have helped me cross mountain passes on Kamchatka. And, shockingly, the were on my feet everyday as I hauled 100 pounds and ran 50km per day (with some much longer days) across the rock hard, frozen black ice of Lake Baikal, and they didn’t break!

An hour after leaving camp, I was winding my way up the frozen Owl River, which would eventually lead several miles later into a river canyon of sorts, flanked by steep slopes and populated by large boulders strewn everywhere popping up in the ice, like they were thrown into place by a giant playing marbles. I knew the ice here was thin and I was in an area of dry overflow. With my MICROspikes®️ on, I made my way through the boulders, weaving right then left, sometimes climbing over their icy clad covering, but with total and confident traction. I’d unhook my sled and pull it along with me for fear I might break through at a moment’s notice. The wind picked up and was now blowing furiously at over 100km per hour, and my goggles were a frozen mess. (I usually bring several pairs on winter expeditions for just this reason, but I couldn’t stop to grab another pair. The weather was getting worse and it would soon be getting dark. I needed to keep moving forward.) Suddenly, and without warning, the ice gave way beneath my feet and I plummeted down into a hole between a few boulders, and my sled followed me soon after as it crashed down. I was six feet below the surface of the ice, so I was able to climb out a bit banged up and bruised, but with all of my gear down in the hole. I said a silent “thank you” in my head as I hooked my MICROspikes®️ into the base of an icy boulder and hauled up my sled. I was so glad I had them with me.

Over the next days I would continue to fight colder and colder temperatures. Winds continued to blow hard, and as I made my way into the final and most difficult days of the trip, temperatures dipped below -60 degrees. My eyes were almost swollen shut from frostbite on my eyelids, but I was still smiling!

The most difficult day would be my last, as I crossed a series of glacial moraines, frozen boulder fields, and wet overflow sections. Writing this article, the hair stands up on the back of my neck thinking about how sketchy some of the moraines were—I was sure at some point I’d lose traction, sending me and my sled hundreds of feet below into the frozen overflow of the normally raging Weasel River. But, once again, my MICROspikes®️ saved my ass. They kept me upright and moving forward through the rocks of the moraines, and on through ankle deep icy water overflow on the super steep sections of the Weasel.

My finish would be through massive frozen boulder fields leftover from thousands of years of geological transformation. I stepped confidently and cranked out my biggest day of the expedition! As I ran into darkness, to where I would meet my pick up in Pangnirtung Fjord, I looked back over my shoulder and smiled. I was so stoked to have completed this expedition that meant so much to me, and to have crossed this part of the world that I love so much. In the end, the adventures that are the most important are the ones that mean the most to each of us as individuals.

I wish I could have seen Billy the night I finished, but they had to turn back on the snow machines long before the moraines. When we did get a chance to catch up by phone a few days later, he asked me if I was happy. I said yes—YES! I was so happy.

He said he was, too. Even if he thought it was a crazy time to come for a visit and an adventure.