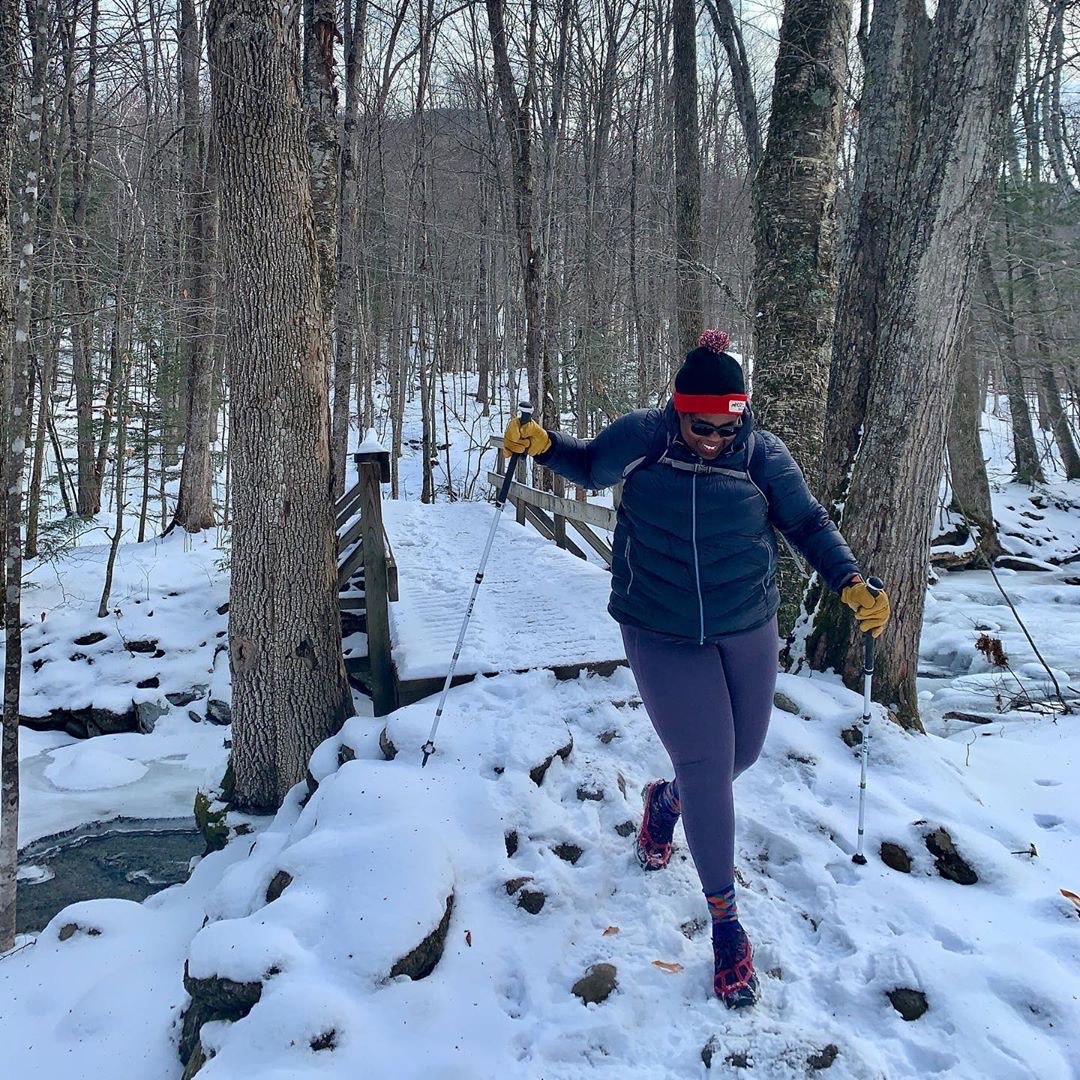 In my adulthood I have relocated many times up and down the eastern seaboard, but have ended up (hopefully permanently) in the great state of Vermont. In the summer it glows green, much like a bumpy emerald shimmering in the sun. In the fall, it is gold, orange, red and cool—weather that conjures up (and produces) apples, cinnamon flavored delights, pumpkins and hearty soups.

But OH WINTER! It sparkles, it is deeply cold, dark in the afternoon, and filled with hushed wonder.

I moved here in the dead of winter after having an extraordinary week of adventure with a friend. We took a snowboard lesson (where I discovered that it wasn’t quite my sport), and we snowshoed up Hunger Mountain where there were four-foot high banks on either side of the trail. It was silent. It was sacred.

I love the ability that snow has to silence the noise. I relish the idea that winter climates force us to be self-reliant. It forces us to confront the boundaries of our comfort zones, expanding them, requiring us to be a little chilly and to be OK with it. To embrace a little discomfort so we can further explore and discover incredible moments of awe and wonder we can experience as human beings in this incredible world.

During the week I was visiting here with my friend, I happened to wake up at 4 a.m. and look out the window of my cold room at the local Inn to see a couple of runners in the winter darkness—it was about 10 degrees or so that morning. I decided that these were my people and this is where I needed to live.

There were several reasons I moved to Vermont. Since I had decided to leave teaching full time to embrace the full-time athlete, speaker and influencer life, I needed to be in a place that was conducive to the type of work I did. Mountains and trails—check! Affordable—check! Beautiful—check! Safe—check! Filled with a community that loves to recreate outdoors in the wintertime—check!

The only thing Vermont does not have as much as other places is a lot of racial diversity. Was that a thought in my mind as I chose this place? Yes. But being a person who has always lived and worked in predominantly white places and perceived white spaces, I didn’t give it a second thought. Because I couldn’t.

I decided and needed to live here because I could participate more easily in winter activities like snowshoeing (great for running cross-training), hiking in the snow (also great for runners), cross country skiing (yet another fantastic cross training tool), and downhill skiing (which, I am NOT good at, but is fun and exhilarating anyway). I wanted to be around people who trained regularly, and who could be available and up for a spontaneous mountain climb or swim in a cold lake—all in the name of training—both for events and, well … for life and longevity.

I am an athlete and Vermont was where I could easily train and recover year-round, preparing myself for a multitude of races and other athletic events I would need to be present at as host, speaker and athlete.

I am grateful for having grown up outside. My outside was an urban, citified outside—an outside that included man-made things like concrete, tall buildings and neighborhood parks, but an outside nonetheless.

When I hike up an extremely icy Stowe Pinnacle Trail, the Long Trail, or a busy local trail in central Vermont, I recall exactly those days in my youth when I also relished the cold on my face and the eagerness to play. Today my play (and work) includes training on these trails, in the snow and ice, up and down mountains, crawling under or climbing over blowdowns. It is a life that I cherish.

Mostly, I am the only one of very few People of Color, or more specifically, Black people, out on the trail. As a person who is an equality and inclusion educator, it is incumbent upon me to look at the spaces I inhabit, and examine why or why they don’t reflect a broad spectrum of humanity.

At present, many outdoor spaces don’t. The U.S. was founded upon land grabs that did not include indigenous populations or Blacks. These lands were then formulated and re-imagined by people like John Muir, who often saw the preservation of wild lands as existing without the people that actually inhabited these lands. The development of the American outdoor image came to be through the white experience, and the idea of who an adventurer was or who recreated in these spaces was white and primarily male. If you look at representations of who recreates in the outdoors outside of recent media, it isn’t a very diverse set of humans.

This idea is changing to be more expansive and inclusive, albeit slowly. With the exception of the explosion of outdoor magazines and other media in the last few months as a collective response to the racial strife our country is experiencing, the idea of the outdoors has historically been conceived as a white space.

The definition of what the outdoors is becoming more expansive as well. In 2018, I was named as one of National Geographic’s Adventurers of the Year. I immediately questioned why they would pick me. I hadn’t summited any mountains in the Himalayas; I hadn’t swum any great distances in the North Atlantic; I certainly didn’t own a tiny kayak with which to run class 5 rapids; and I definitely did not ride half-pipes, ski slaloms or prance uphill on thin cross-country skis.

But then I had an epiphany, this is it! This is how we change a narrative. We make whatever our image of the outdoors is a bigger one, with a wider array of people that represent the entirety of the spectrum of humanity along with the variety of experiences. I realized that even my own idea of adventure and what the great outdoors is was limited, and I needed to change my own limited thinking. 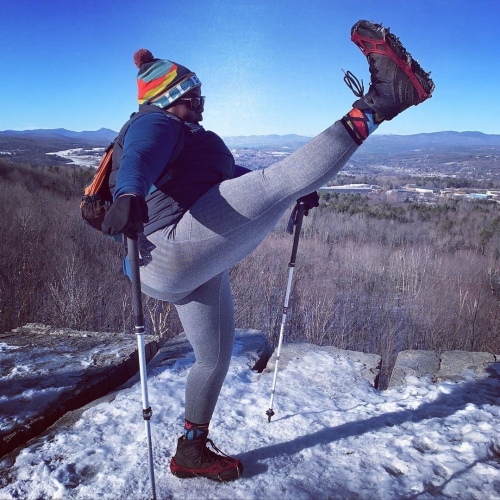 I had seen my adventures as small—a run on a beautiful trail here, a mountain climb there, a swim in a lake, a hilarious attempt at skiing on an icy mountain in New Jersey (and having to be rescued by ski patrol), and constantly seeking experiences outside of my home as insignificant and not worthy of THE GREAT OUTDOORS. But I was limiting my own experiences and not allowing them to be representative of what adventure could be, not realizing that what I do now is the outdoors.

What I did as a child, roaming the cement jungle peppered with neighborhood parks, was and is the outdoors. Splashing in city pools and venturing out on a surf board in Costa Rica is also the outdoors. Having a neighborhood picnic and beach day on the North Shore of Long Island is the outdoors, too. Making snow angels and throwing snowballs at my siblings and cousins while we hid behind the huge snowbanks in our beloved Brooklyn after a blizzard is my outdoors—and so is making my way up a steep mountainside, MICROspikes® sturdying my body in snow—delighting in the unique gift that winter gives us everywhere.

These are all spaces to be held sacred—our cities, our mountains, neighborhood green spaces, streams and beloved trails. The spaces we inhabit are sacred, wherever they may be, whatever form they may take. And the people that inhabit them are, too, whoever they are.