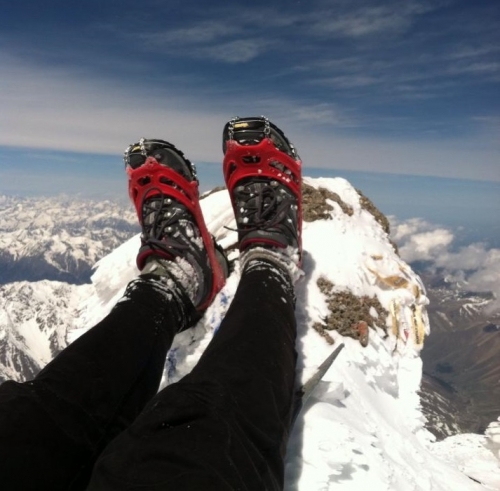 MICROspikes at the top of Russia's Mount Elbrus, elevation 18,510. All photos courtesy of Matt Muchna

It’s 9 a.m. and the dark storm clouds from the previous day are already starting to roll in. I’m close, maybe even within a half-mile from the summit, but I have to move quick.

Outfitted with my mom’s hiking poles, plastic bags wrapped around my feet between two pairs of old wool socks and a borrowed down jacket, the only piece of gear I had that actually belonged on that mountain was my Kahtoola MICROspikes®. It wasn’t the usual case of summit fever that was pushing me onward. It was a check for $3,000. Mount Elbrus, located in Russia, is the tallest point on the European continent and one of the Seven Summits. If I made it to the top, I’d win the bet.

Just shy of three years prior, a bet was made on the sandy shores of Oahu. My best friend Pete and I were in an argument after I had just convinced him to fly to Hawaii with me for the summer. We had no plans, no place to stay, and roughly $80 dollars to our names. Pete is a realist who hates being sandy. At the time, we were both 20 years old. While Pete was concerned with where we would sleep that night, I was grinning ear-to-ear knowing that we could do anything. It was this moment of unbridled optimism that I said, “I’m going to climb one of the Seven Summits.” Pete, already tired of sun and sand, rolled his eyes. “No way, prove it.” Exchanging blows, I quickly shot back, “Yeah, I will, and I’ll do it in the next three years.

From Pete’s perspective, we were quite literally “broke college students” and expeditions like this often cost upwards of $10,000 dollars or more. The bet was on. The terms were set: 1) Climb one of the Seven Summits, 2) in the next three years, and 3) for under $3,000—all airfare, equipment, permits and everything else included.

About two-and-a-half years passed and things were not looking great. For comparison, summiting Mount Everest averages a cost of $45,000. Denali can eat up close to $10,000 of your pocket book. My optimism was starting to look foolish.

Then, as luck would have it, that spring I was invited to be the best man in my friend’s wedding in Ukraine. My eyes lit up. Ukraine was a 10-hour train and 3-hour cab ride to the base of Elbrus. While a permit to the mountain and required guide cost well above $3,000, I found a Russian skyrace event that ended at the summit (permits and guides not needed). All I had to do was enter. The race was a mere week after my Ukrainian wedding. Even though I hadn’t won a scratcher lottery ticket in over a year, the gods were finally on my side.

Mountaineering gear is no small investment. For an expedition like this, a typical shopping list would include ice axes, waterproof boots, crampons, sunglasses, balaclavas, oxygen, wool layers, waterproof clothing, a helmet, ropes and harnesses. But this wasn’t within budget. To win this bet, I’d need friends in high places.

I emailed Kahtoola with my sob story and within one day, Danny Giovale, Kahtoola founder and owner, emailed me back personally. He said, “Right on! We’d love to give you a pair of MICROspikes.” This act of generosity gave me the tools I need to keep my feet stuck to the mountain and a little extra cash to bribe my way out of a seedy situation that I don’t have the time to get into here.

I’d barely recovered from the week-long hangover in Ukrainian-wedding-style when I found myself at basecamp. On the day of the race, I climbed to 17,200 feet before thick fog and whipping wind canceled the trek to the summit. Two racers who pushed on never made it back down that day. It left me with the sobering reminder that mountain climbing is always a dangerous game.

For two more days, I sat in the rain at basecamp with dwindling hope. On the last day before my flight home, the skies cleared for a moment. Gathering my gear as quickly as I could, a group of hikers with Everest trip patches on their knee-length parkas and professionally sharpened crampons watched me skeptically. They thought I was crazy, but I knew all I needed to summit was a pair of MICROspikes.

Now breathing heavily and trying to stay awake, I was only 30 feet from the summit. The reality hit me. I had won the race against the forming clouds. I took out my flip phone and snapped two photos for proof just before it froze and powered down. It was all I needed. I let out a shout at 5,642 meters (18, 510 feet) and looked out into the atmosphere towards the country of Georgia.

At the end of that day, I had won the bet. What’s more, I had also started a relationship with Kahtoola. This company and its people have since supported many other adventures. In 2017, they sponsored my brother-in-law “Bigfoot” and I (“Wildcat”) to compete in the TransRockies™ Run. Kahtoola is an adventure-first type of organization and one that I find myself consistently grateful for on icy backcountry terrain. They’re my go-to Christmas gift and winter outdoor “must have.” And, one time, they pretty much won me a $3,000 bet.

Matt’s epic story and adventure, titled “The Bet,” is also a Dirtbag Diaries podcast. Give it a listen here.