With Beauty and Positivity 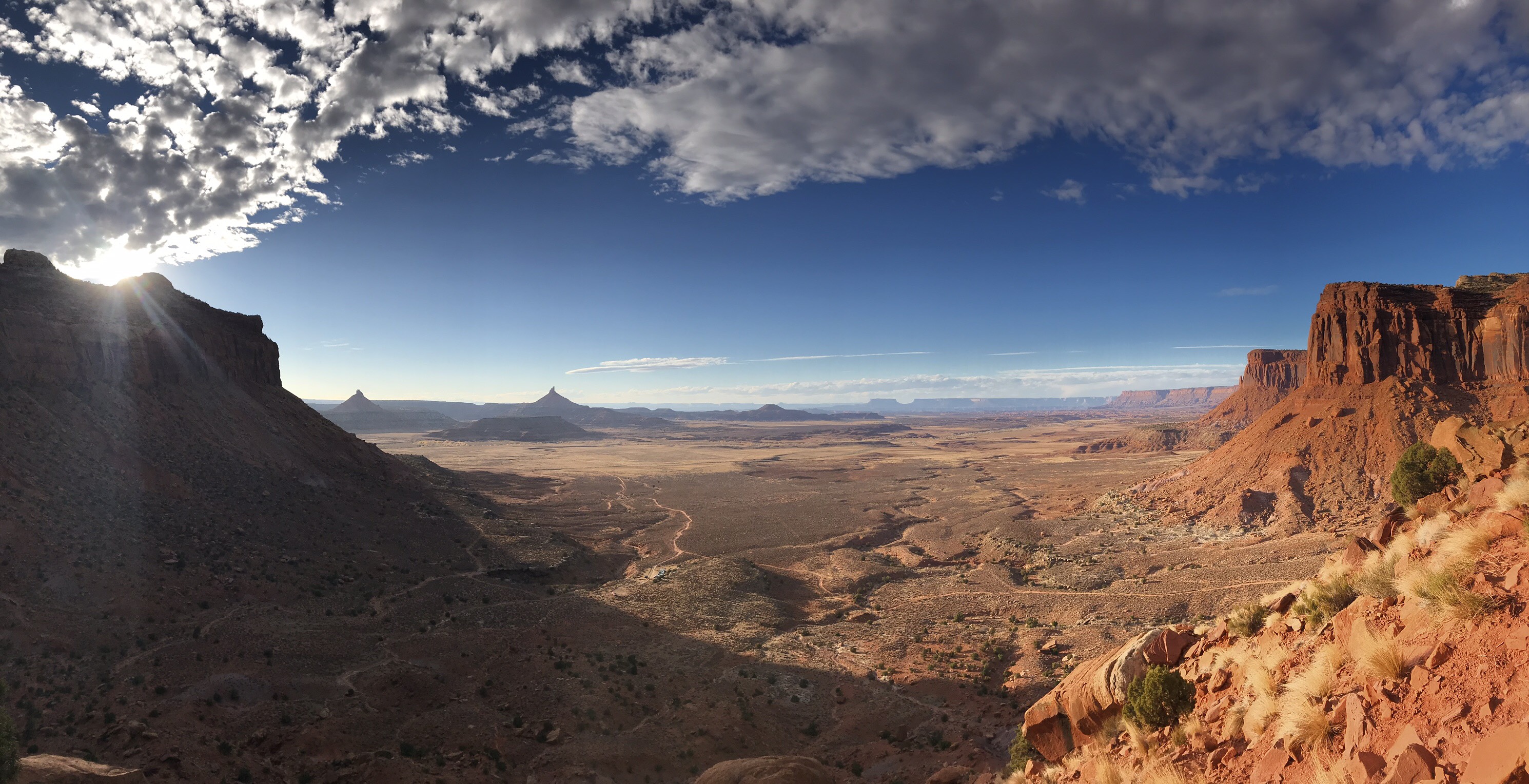 Looking out at the Six Shooters from the Meat Wall in Indian Creek, part of Bears Ears National Monument. Photo by Andrew Wisniewski

We all have that friend. The one who, the second they cross over into their favorite landscape, they transform. And the first time they connected with that wild and wonderful place a piece of their soul forever changed, and it became part of them. I am that friend. You are that friend. My friend’s name is Brian.

I’ve known Brian and his wife, Jordan, for several years, but it wasn’t until a Fourth of July kayaking and deepwater soloing trip last year that we really came together. A simple day trip along with a shared affinity for the outdoors inspired us to hatch more adventure plans—one of which, in April, saw us and a group of close friends in Indian Creek, Utah, for a much-needed climbing trip and reconnection to ourselves, each other, and the natural world.

Up to that point, I’d never been to the Creek let alone any other part of Bears Ears National Monument. Brian, on the other hand, had. It’s his spot, where he feels most free, away from the insanity of the world. With a deep-seeded love for splitter cracks that go on forever, the moment he moves over the monument boundary line and dips down into the canyon where Newspaper Rock signals release, a need for desert life that stirs inside comes quickly alive. And it’s contagious.

The trip proved so memorable that we all returned last month to again immerse ourselves in the sand and stone, and to dig in a little deeper. At the root of it all: this magical land, a place that is the stuff of dreams. Where the auburn sunrises and sunsets soak into our very reason for being. Where the rocks still speak and a sense of being watched looms all around. Where the world is bigger than any one of us.

The first time I took in this small part of Bears Ears felt like the first time I stepped off the bus in the middle of Denali National Park for my first Alaskan backpacking trip—human nature grabbed hold as I stared out into the surreal expanse of one of the wildest places anywhere on Earth. I fell in love instantly; its immense beauty had my respect. And while its national park status ensures its protection, the thought of something so pure ever being marred remains unimaginable, just as Bears Ears is now.

The politics surrounding Bears Ears and Grand Staircase-Escalante are clearly complicated. But really, the conversation shouldn’t even be a political one; it should be one of heritage, common sense, and respect for the land and its people. When “giving the land back to the people” essentially translates to opening the door for the fossil fuel industry as well as looting and encroaching on the area’s cultural treasures and pristine lands for monetary gain, that’s far from showing respect.

To show respect and truly give the land back to the “people” would be to never steal it from them at all. Instead, descendants of those five Native American tribes (as well as environmental activists) fought for their lands the right way, lobbying an Obama administration for years, taking the time to explore the facts in search of a result that not only benefited more people than it didn’t, but also considered future generations.

In a hasty four-month review, without authority and only listening to the whispers of his inner circle, President Trump did the exact opposite by executing the largest elimination of protected land in history.

To offer some perspective, as president, Teddy Roosevelt gave federal protection to 230 million acres of public land. All of 10 months into the job President Trump and Interior Secretary Zinke (who on day one pompously rode up to the White House on horseback in honor of Roosevelt) already find themselves in the negative, having rescinded roughly two million acres of public land—with likely much more to come.

This blog post comes a little more than a week after the news that Bears Ears National Monument would be shrunk because, honestly, I’m not sure I could’ve written anything constructive that same day. It would’ve been vitriol and vomit. So, I sat on my words. And it proved an interesting and smart choice, because following a day-of company Facebook post in opposition of the reduction, for the next week, we received an uncomfortable amount of those two things from supporters of the reduction—I’ll call it uneducated, unconstructive criticism. It was not beautiful. It was not positive. And from what I’ve largely seen, no one in favor has offered a persuasive, overarching argument that despoiling areas marked for conservation would be a benefit in the short or long run.

The facts for why protecting public lands is important are many, and they’re out there, right in plain sight. But simply, we cannot reclaim what we destroy. We have one Earth, and it doesn’t need us to survive, but we sure as hell need it—which is why, as our population grows, the need for special, untouched places to which we can escape the everyday world becomes more important. Brian and Jordan gave me just that, right in my backyard. Their love for this place—that heals and clears the head and heart, and brings people together—bled into me. A common ground in the outdoors.

So, here we stand: me, you, friends, the Inter-Tribal Coalition, conservationists, recreationists, outdoor companies such as this one, Kahtoola, and everyone else who has a stake in protecting our public lands. We won’t stop fighting. We won’t stop educating. With beauty and positivity we will continue to treat Bears Ears and Grand Staircase-Escalante with respect. Our public lands are happy to hold us, but not if they’re destroyed by the very hands that should be caring for them.