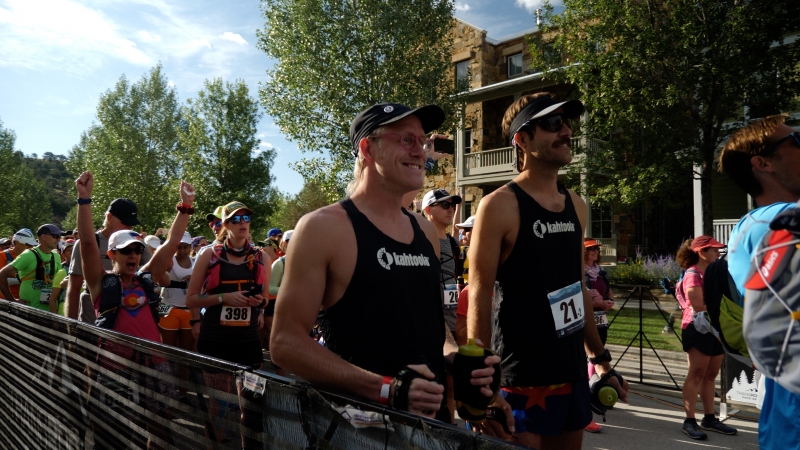 Matt "Wildcat" Muchna and James "Bigfoot" Madson at the starting line of the 2017 TransRockies™ Run. Photo courtesy of Fireside Media

There’s something oddly romantic about ultrarunning.

Sure, to the uninitiated that may sound like an intimidating oxymoron, but to the men and women who willingly push themselves to the brink of physical and emotional exhaustion, there’s nothing that quite compares to getting out into remote, wild places on foot, and following trails that constantly disappear only a short distance down the line. You could say it’s inviting to the soul.

But, as those who regularly participate are well aware, it’s also really weird.

Three years ago, as a way to give back to the trail running community, celebrate the spirit of adventure and support the “everyman,” we rubbed some brain cells together and cooked up the brilliant idea to sponsor a team of two (nominated by others) for the annual TransRockies™ Run—a 6-day, 120-mile trek into the Colorado Rockies. We call it the Kahtoola Race for the Rockies, and this year our team of Matt “Wildcat” Muchna and James “Bigfoot” Madson arrived with the mission of keeping ultrarunning weird.

“At its core it’s a pretty bizarre activity,” Matt says as James offers up a familiar laugh. “Just to run to push yourself into a dark place, both mentally and in a physical environment, and running through the night in the mountains with bears—it’s pretty dumb. But it’s also intriguing and interesting.”

Friends since childhood and eventually brothers-in-law, the two connected over distance trail running in Eugene, OR, a running mecca similar to the Kahtoola headquarters of Flagstaff, AZ. James showed Matt what the process and act of running was really all about, as opposed to just fitness. And that’s not to say they don’t push themselves—they certainly do. But it comes from a place of fun. Long before ultras, as kids, they were coming from such a place.

“We would go on hikes and then run down as fast as we could and be like, ‘Wouldn’t that be awesome if there was a sport where we could run down trails and get time reductions if you do tricks’? That’s where we were at,” Matt says. “We wanted to do parkour trail running (James, again, laughs), and no joke, James, two months later was like, “Dude, trail running’s a thing! It’s a real thing people do. It’s a sport!”

Years later, with two feet already in ultras, Matt and James found themselves living in Flagstaff. While in Flag, during a trip to Oahu, HI, Matt had made a bet with a friend that if he could stand on top of one of the world’s seven summits for under $3,000, his friend would pay for it. He chose Mount Elbrus in Russia. The full story, “The Bet,” is documented on the podcast Dirtbag Diaries; however, during preparation, he was introduced to Kahtoola Founder Danny Giovale, who was instrumental in helping ensure he’d be safe on the mountain. Danny also helped Matt and James prepare for a partial trip across the French Pyrenees, James’ first encounter with Kahtoola.

In 2016, after hearing about the TransRockies™ Run sponsorship, and based on their prior dealings with Kahtoola, they went for it. They campaigned and received an overwhelming amount of support, not only as brothers-in-law but as adventure partners and compadres. Still, they lost.

Being the opportunists that they are, this year, they once again tossed their names in the hat.

As Matt says, “I had this unofficial idea that if we didn’t win last year, we shouldn’t put our name in this year.” They asked themsleves, “What would change for us this year?”

What changed is that the second time around, they won.

Just as both Matt and James say the reason they run is to keep things in their lives aligned and balanced, their intentions—from conservation efforts to how they approach trail running—also aligned with Kahtoola’s, and with no added pressure of where they finished each day, they took their sense of fun and unique weird with them to the TransRockies™ Run.

“Our intentions overall are to keep ultrarunning weird and unintimidating,” Matt says.

Look no further than Day 3. At the end of the six-day race Matt says he “felt like superman,” but the end of that third day was the lowest point. So much so that it caused the duo to ask a familiar question when running ultras: Why do we even do this? The answer that day: The Beer Mile, an unofficial one-mile race where participants run as fast as they can for one mile, while drinking a beer every quarter mile, without puking. (James puked.)

“Of course, this is why we do this!” Matt says, he and James both laughing. “It was kind of our main event going into the whole thing. It’s the only event you’re not required to do to finish the race.”

Aside from all the Michelob Ultra, each are quick to note the ultrarunning community, from the elite to those who shine bright in their own way—like two French dudes they regularly talked shit to on the course. Those same guys supported them on that challenging Day 3, and by the very end, Matt and James had become their favorite people during each stage.

“The culture is good. It has soul,” James adds.

Regarding the weird and the why, Matt recalls a thought he had years ago while running the Pine to Palm 100, a remote and rugged classic point-to-point course traversing the Siskiyou Mountain Range in southern Oregon.

This is so weird to me and I’m not even sure why I’m doing it, but this is cool. And it’s weird enough where humans naturally shouldn’t be doing this, especially in our current civilized and urbanized state.

As for keeping ultrarunning that way moving forward, Matt says, “It’ll be important for runners and communities to create their own Fat Ass-style races,”—ultras that are relaxed, low key, and loosely organized. “It’s about finding ways to continually push the envelope.”

On the other hand, James says, “Trying something new and not being afraid to fail.” Also, fashion. “Less Lycra and more plaid. … And fast haircuts.”

Check out our video documenting Matt and James’ journey and nominate a team for the 2018 Kahtoola Race for the Rockies here. Nominations are open through the end of May. Run weird!