Gaiters for the 21st Century—What Makes Ours so Special? 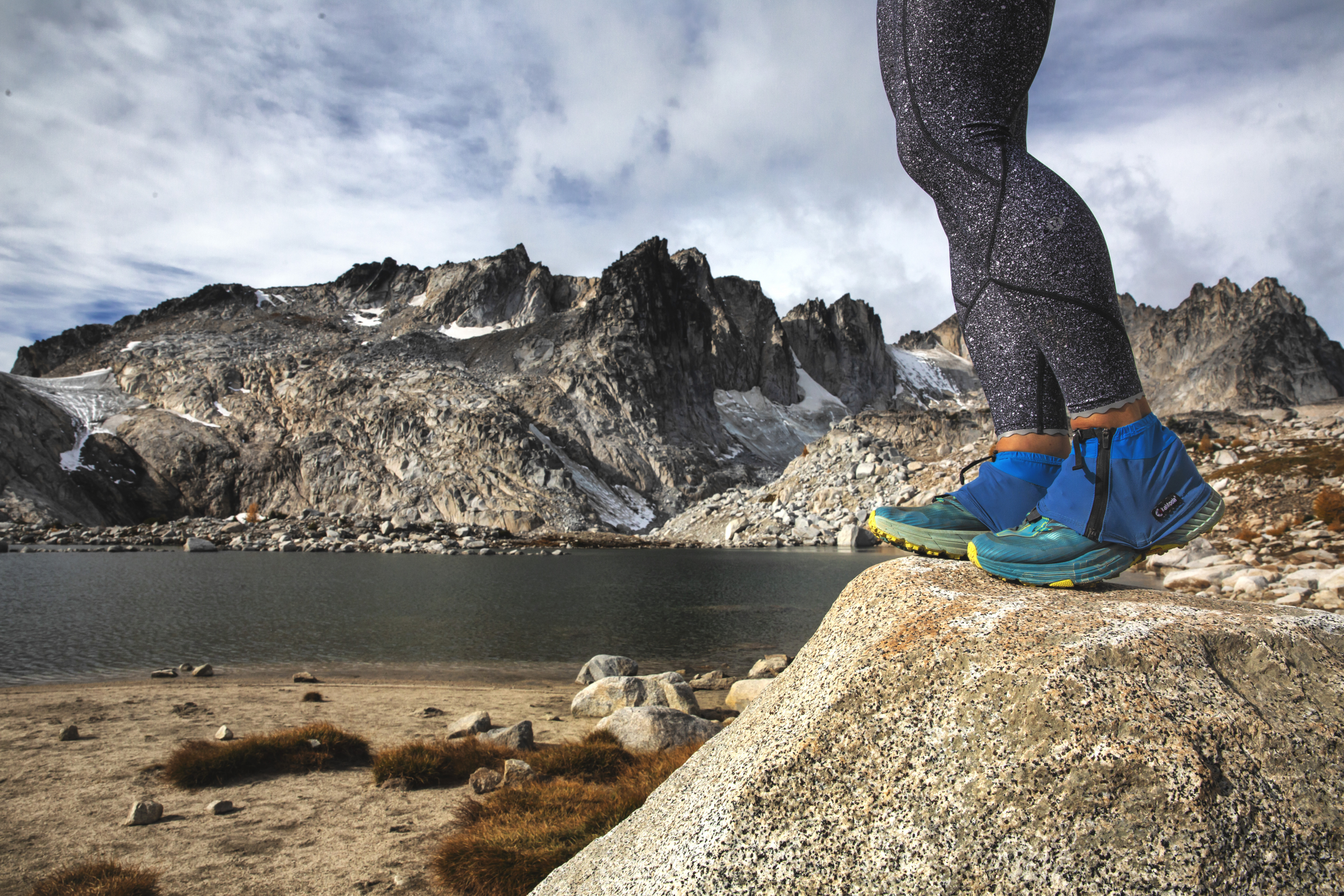 It all started somewhere in a remote part of the Grand Canyon in September of 2015. Down in the depths of one of the world’s most famous geographical wonders, Kahtoola owner and founder Danny Giovale decided to take on a new challenge—Kahtoola was going to design a gaiter fit for the 21st century.

The idea wasn’t an epiphany, but one that slowly crept into his mind as he watched his friend John Davis struggle with his gaiters while they crossed the Canyon together. As Director of the Rewilding Institute, John was working his way across the Western Grand Canyon in an effort to understand—and ultimately protect—wildlife movement corridors in that area. As luck would have it, Danny lives in nearby Flagstaff, AZ, and he readily accepted an invitation to join John and two other conservationist/adventurers on their week-long journey.

By the time Danny met up with John, he was already a long-time believer in the merits of gaiters—in winter or summer—and their ability to keep rain, snow, rocks and other debris out of his footwear. It turns out, John was too. So as they walked, Danny was able to get a first-hand look at how his friend’s gaiters were performing. He wasn’t impressed.

John was struggling, and it started to dawn on Danny that gaiter design seemed to be frozen in time. The materials used were heavy and uncomfortable, as was the velcro closure at the front. And the fit was poor, which allowed the back of the gaiter to lift as John walked. Underfoot, the instep strap and buckle were easily damaged and difficult to replace.

“The tech he’s wearing is literally 50 years old,” Danny thought to himself. It was clear to him that the traditional gaiter design was in

desperate need of an overhaul. And he believed Kahtoola could make a real difference in people’s outdoor experiences with a modern range of activity-specific gaiters.

So when Danny returned home, he got together with Kahtoola product designer, Chris Bunch and they started working on something new. They believed thoughtful and specific design changes would solve many of the problems Danny had observed during his hike with John. And they were right…

In 2017, we unveiled our first gaiter. The changes Danny and Chris came up with have made gaiters more functional, comfortable to wear, and durable. As a result, gaiter use is now open to whole new segments of outdoor enthusiasts. Today, we produce a range of gaiters tailored for different uses, but there are three core design features that remain consistent across the entire line and that set our gaiters apart from all others.

Now, let’s get into how and why these are such important design changes. 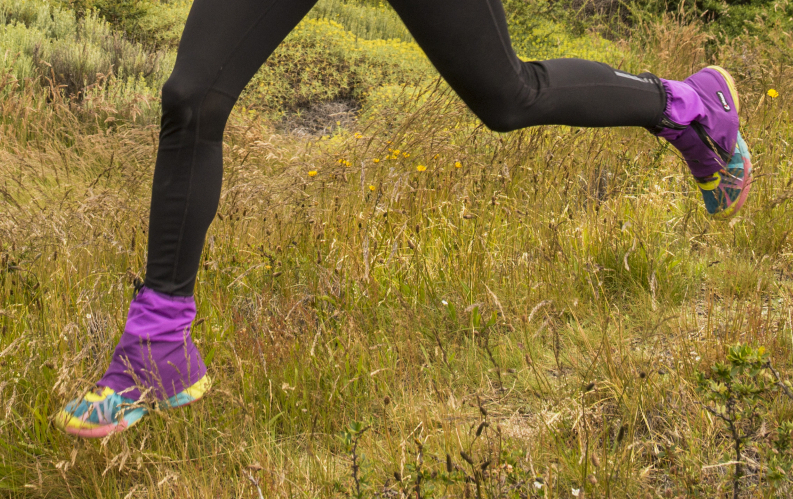 Traditional gaiter designs are essentially a tube (or cylinder) made of a single piece of material that extends down the leg, with a small flap around the bottom that covers the top of the boot (in some cases, it’s held in place by an elastic band). This is very straightforward from a

design standpoint, and because the flap is small, it should resist flipping up and over the heel of the boot—one of the most common problems users have with gaiters.

But as Danny made his way through the Grand Canyon with John, it was obvious to him that this cylinder and flap pattern wasn’t working as intended. The one-piece design didn’t conform to the complex shape formed by John’s lower leg, ankle and foot, so the backs of his gaiters were consistently lifting up over his heels, letting in dust and other debris.

So Danny and Chris decided it was time to throw out everything they knew about how gaiters should be shaped and start from scratch. They began by adding tech to their prototypes—things like non-slip dots on the inside at the back of the gaiter, for example. But in the end, it was the simplest solution that proved to be most effective.  They came up with a pattern and fit that made it nearly impossible for the back of the gaiter to lift.

Rather than a cylinder that flares out slightly when it meets the shoe or boot, our gaiters use a two-piece, fitted and strategically tensioned design. One that extends further down the footwear than traditional gaiters, and covers a larger portion of the heel more effectively. More coverage translates into a better seal that keeps snow, water, dust and other debris out. And the two-piece design allows the gaiter to take on an inverted funnel shape—rather than a uniform cylinder—that contours around the heel. The result is an ergonomic, form-fitting gaiter that hugs the boot or shoe and resists lifting. 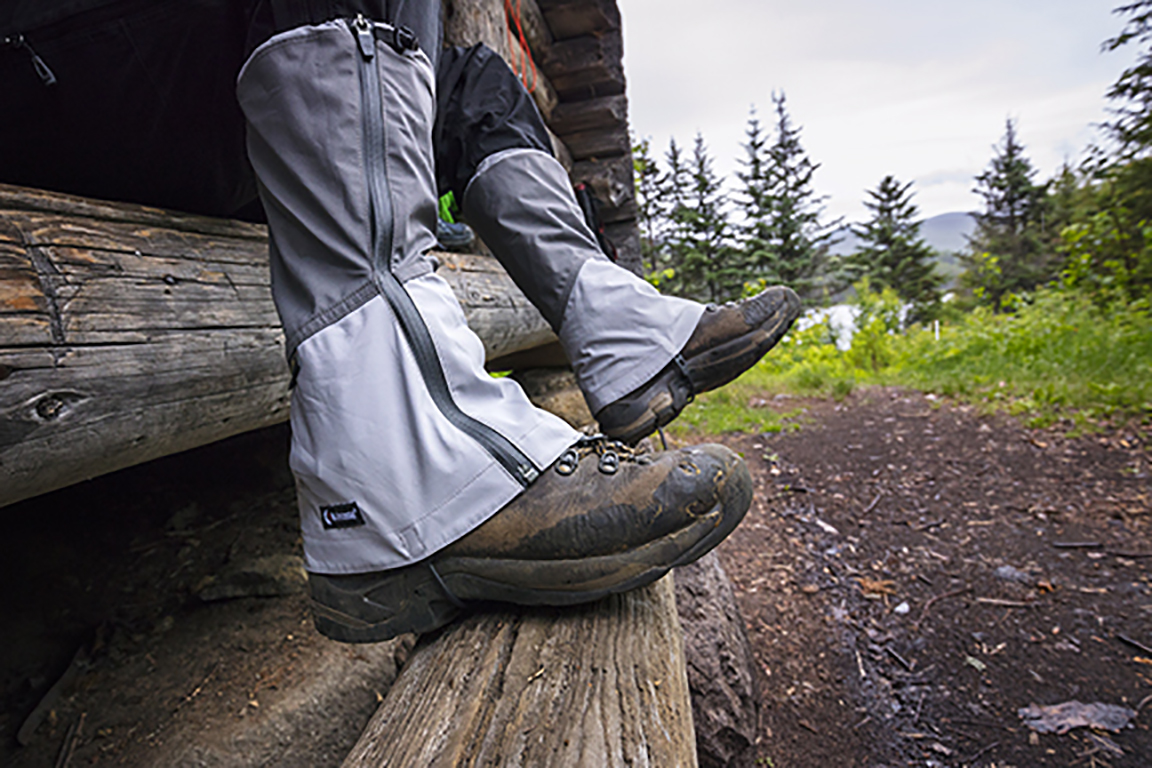 As Danny and Chris set their minds to designing a modern gaiter, they couldn’t help but address the closure. Traditional gaiters close at the front and many use velcro as a bond. Velcro is durable and relatively easy to use, but was introduced when gaiters were primarily designed for use on hard mountaineering boots—and it worked well for that application. Velcro is easy to manipulate with large gloves and the stiff bulky closure went unnoticed over top of hard plastic boots.

Unfortunately, this design doesn’t translate well into use with soft footwear and warmer temperatures. As Danny and John walked, it became obvious that this type of closure was too stiff and uncomfortable for use on long hikes or trail runs, where comfort and dynamic range of motion are paramount. With each step, the wide velcro closures bend and push into the shoe or boot, reminding the user it’s there.

Instead of a velcro closure, our gaiters use a zipper with a locking slider that’s positioned at the side of the shoe, rather than the front. This design allows for maximum range of motion with minimal discomfort. In order to provide enough holding power to keep gaiters closed, velcro closures need to be large and bulky. A zipper provides robust holding power and is more flexible than velcro, setting the stage for the foot to move more freely. But a zipper is still stiffer than the gaiter fabric and if it is located at the front, will fold and press against the foot with each step—over the course of thousands of steps, this becomes uncomfortable.

Moving the zipper closure to the side of the shoe drastically reduces the amount of movement the zipper must endure. And when it does bend, it isn’t pushing into any part of the foot, resulting in a much more comfortable experience. A zipper closure also adds convenience as it can be left half zipped up and allows the gaiter to remain on the shoe or boot when not in use. And all Kahtoola gaiters feature a locking zipper slider that keeps the zipper in place and eliminates the need for a clasp at the top of the closure. 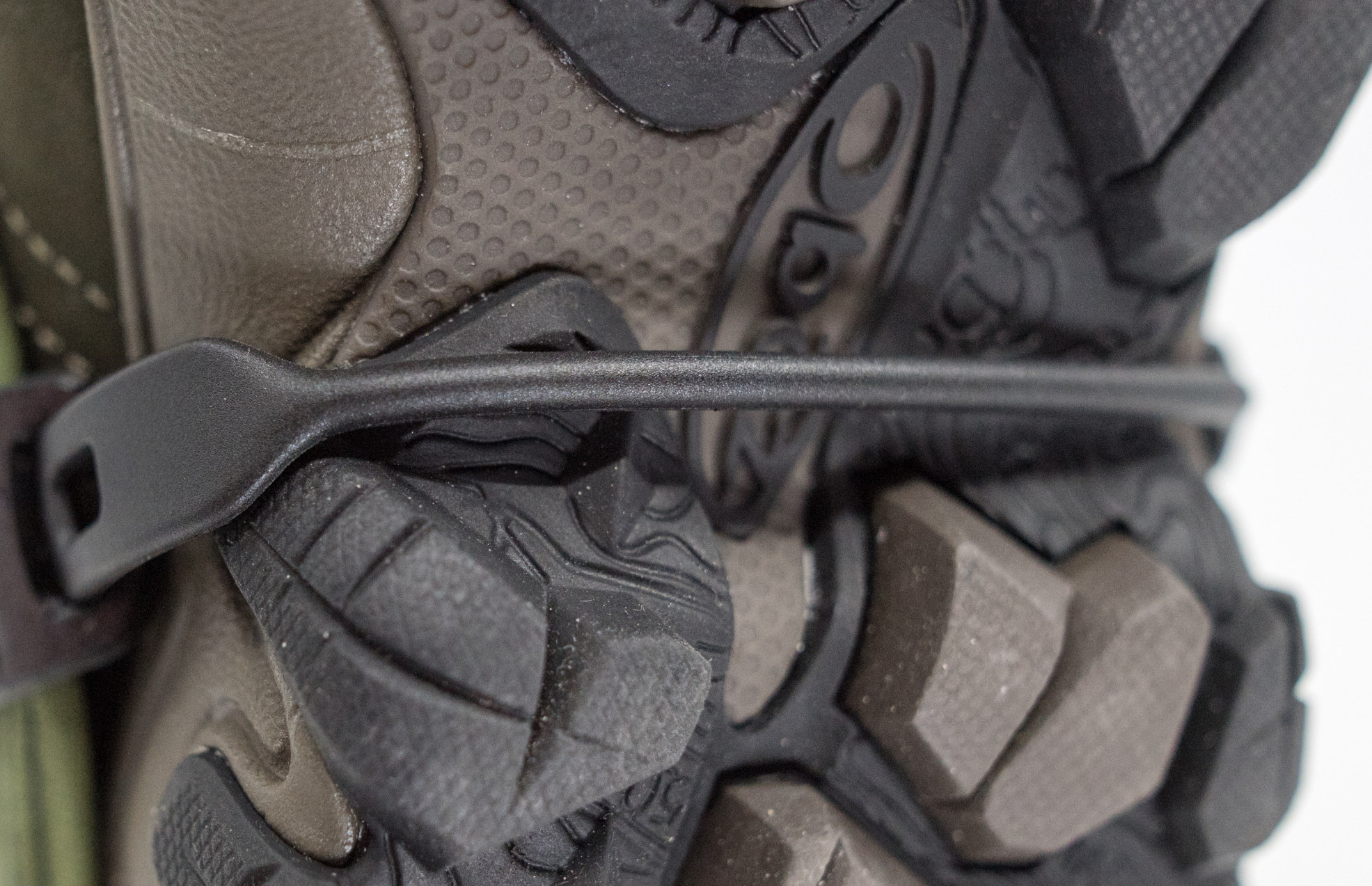 Instep straps are a notoriously weak link on traditional gaiters. And so they were high on the list of modernizations Danny and Chris wanted to tackle. Historically, instep straps come in two types: a flat, durable strap, or a thin lightweight cord. They’re designs that have resisted change over the years, seemingly because “that’s the way it’s always been done”.

Unfortunately, those straps come with some significant weaknesses. Flat straps, while durable, are bulky underfoot and can catch on terrain and twist. They also tend to come with a cumbersome buckle-type adjustment. On the other hand, lightweight cord straps are barely noticeable but are notoriously fragile. And to top it all off, most instep straps are permanently attached to the gaiter, so once they’re damaged, are difficult, if not impossible, to repair.

Chris and Danny knew they needed to come up with a strap that would be nearly unnoticeable underfoot, no matter what type of footwear was being used. It also needed to be exceptionally durable and lightweight, so it didn’t feel out of place on a lightweight gaiter. It was a tall order, but they were up to the challenge and after dozens of iterations, Chris and Danny designed an instep strap that is truly revolutionary.

Our gaiters feature an instep strap that’s discreet, exceedingly durable, rounded and can be replaced without any tools or repair know-how. It’s made from tough Thermoplastic Polyurethane (TPU), which means the strap itself doesn’t have to be bulky to be strong. In fact, they’re rated for 1,000 miles of use. The resulting thin profile allows the strap to sit up inside the lugs of a boot and is nearly undetectable, even on a flat soled shoe. The rounded shape glances off terrain features, rather than catching and twisting like a flat strap. The design is highly adjustable, removable, and easy to replace. 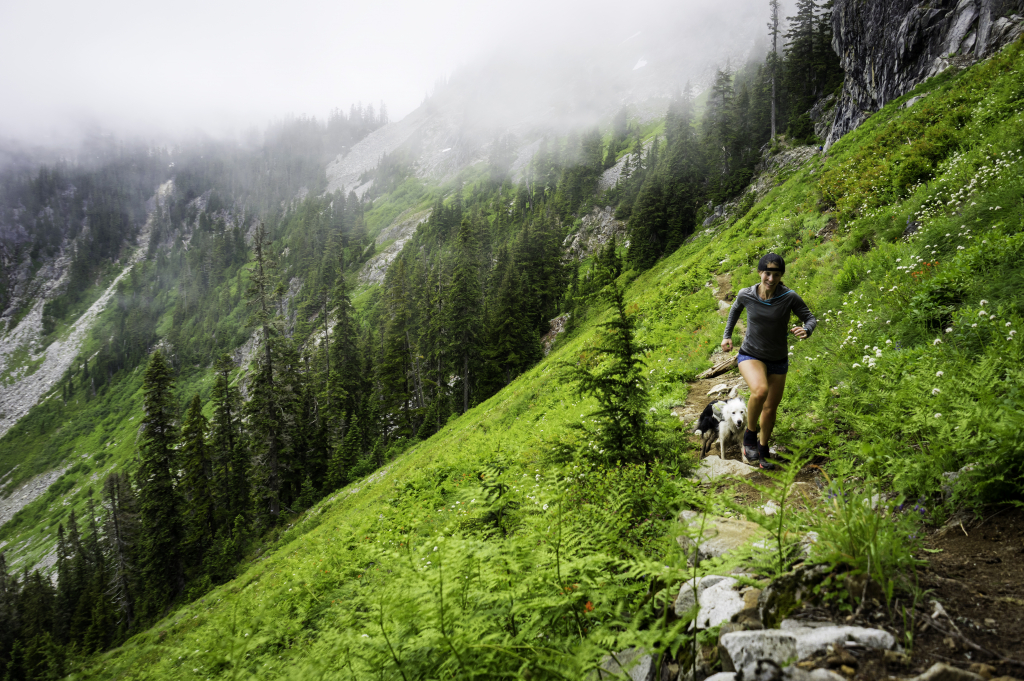 Gaiters are for everyone!

Each of the three design features mentioned above contributes to making our gaiters lightweight, comfortable and user-friendly. From the outset, it was important to Chris and Danny that people would enjoy wearing their gaiters and that they would enhance the outdoor experience, not only for John, but for everyone.

As icing on the cake, our gaiters are also designed for maximum comfort against bare skin, which means they can be worn under pants or with shorts. A lightweight, elasticized drawcord and toggle lock allow for precise adjustability while keeping debris and the elements out. And undergarment stitching around the inside of the cuff feels soft against the skin.

Gone are the days when wearing gaiters was reserved for mountaineers and those willing to endure discomfort to ensure their footwear stayed dry and free of dirt and debris. With updated designs made for flexible footwear and durable lightweight materials that are comfortable to wear year-round, now everyone can reap the many benefits gaiters have to offer.